Breach of Contract and what you can do 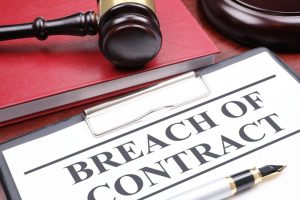 Almost all of us will have been affected by material shortages, but what about parties who have been unable to perform their contractual obligations because of these shortages?

A contract between two (or more) parties will

A breach of contract occurs where one party has failed to fulfil (or intimates that it does not intend to fulfil, without a lawful excuse), an obligation under the contract.

There are two types of breaches:

The remedies available to the non-breaching party will either be available under contract law or under the contract agreement between those parties. Some of the most common remedies for breach of contract include: –

There are, of course, other factors to consider where non-performance is due to circumstances beyond a party’s control. In this case, parties should take into consideration any force majeure provisions within the contract, or whether the doctrine of frustration could apply.

If you have been subject to a breach of contract, or have been put on notice for a breach, then call us today on 0121 268 3208 or send us an email at info@onyxsolicitors.com with your query and we will get back to you. We’re here to guide you through the process and help you come to a decision best suitable for your business needs.