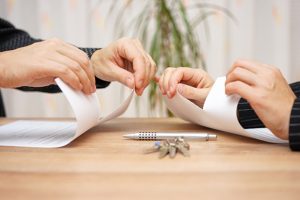 This article provides a summary of one of the ways a contract may be terminated and things to consider when terminating contracts under English law.

Each of the following constitutes a repudiatory breach of contract justifying termination at common law:

Not every breach of contract gives the innocent party the right to terminate. The innocent party will only be discharged from future performance of the contract if the term breached qualifies as a condition, i.e. a vital term. Provided the term is a condition, the innocent party will be entitled to terminate the contract, no matter how minor the consequences of the breach. On the other hand, a breach of warranty does not absolve the affected party from future performance, no matter how serious.

A breach of an intermediate or innominate term, i.e. neither a condition nor a warranty, only justifies termination if the breach is sufficiently serious. It must “go to the root of the contract”, “frustrate the commercial purpose” of the contract or “deprive the party, not in default of substantially the whole benefit” of the contract. In every case, the court will look at the nature and consequences of the breach to decide whether termination is justified.

Where time is of the essence in a contract, even a short delay can trigger a common law right to terminate for breach as the term is considered a condition of the contract. However, as a matter of English law, where a contract stipulates deadlines, time will not be treated as being “of the essence” unless one of the exceptions applies.

There are three exceptions to the general position that time is not of the essence:

When time is of the essence, even a short delay will be a repudiatory breach and engage a common law right to terminate.

Where a party declares an unequivocal intention to abandon further performance of the contract or an intention not to perform some essential aspect of the contract, the innocent party is entitled to treat himself as discharged from further performance.  Not every declaration of non-performance is a repudiatory breach. Sometimes a party will refuse to perform some, rather than all, of its contractual obligations or indicates that he will only perform them in a particular manner. In determining whether the breach is repudiatory the court will consider whether the non-performance amounts to a breach of condition or deprives the innocent party of substantially the whole benefit of the contract (see below).

A declaration of non-performance can be either an express refusal to perform or inferred from the party’s conduct if he behaves in a manner that would lead a reasonable person to conclude that he has no intention of fulfilling his obligations. If a party threatens non-performance before the time fixed for performance, this is known as an anticipatory breach.

Election: accepting the repudiatory breach or affirming the contract

Termination is not automatic. The innocent party may elect either to accept the breach and treat the contract as discharged or to affirm the contract and press the party in breach to perform. A party cannot affirm a contract following a repudiatory breach unless he has a full understanding of the facts leading to that breach and is aware of the right that he has to choose between acceptance and affirmation.

The law does not lay down a particular period in which the election must be made. However, the innocent party mustn’t do anything to jeopardise the right of election, either by waiting too long to decide how to respond or by losing the right of election by inconsistent conduct. In practice this area can be fraught with difficulty because, while the innocent party is deciding how to treat the contract, he risks taking a step that constitutes an election to affirm it and, once an affirmation has been made, it cannot be revoked.

Damages for breach of contract

Damages for repudiatory breach are assessed according to normal principles. This means that the innocent party is, as far as possible, put in the position in which it would have been if the contract had been properly performed, subject to the usual rules on causation, foreseeability, and mitigation. At common law, in addition to claiming recompense for losses resulting from the breach or breaches before the termination, an innocent party accepting a repudiatory breach of contract is entitled to claim “loss of bargain” damages (an amount to compensate for the lost opportunity to receive future performance of the contract).

If you have been subject to a breach of contract, or require advice on terminating a contract, then call us today on 0121 268 3208 or send us an email at info@onyxsolicitors.com with your query and we will get back to you. We’re here to guide you through the process and help you come to a decision best suitable for your business needs.